[DRuG]NikT (24 Apr 2004 12:12 am)
The GTAt 0.5d client, as you may know, has been one of the first internet capable releases, but is still pretty buggy. The GTAt crew do seem aware of this, and find nests of bugs which they have been fixing with very frequent new releases, so make sure you keep checkin back at http://dracoblue.com for updates.

I have finally sorted my port forwarding skillz, and have set up a GTAt server on the same link the MTA and FTP servers use. For those that are looking for the address in the index bar, I haven't bothered, since it appears on the global list in the GTAt client window.

If you're thinking of setting up a server and wanna know how to forward ports on a linux gateway or a router, I have done a HOWTO at The GTA Tournament Official Board (link defunct).

[DRuG]NikT (09 Apr 2004 12:29 am)
[DRuG]Scope has plans for many upcoming releases, but first up, here's 2Fast2Kill - a speed mod that you should only be messin' with if you already have NOCRC from our downloads section.

Make sure you read the readme!!

I have another mod in the works that some of you have been nagging me to finish - apologies, hopefully I find time over the next few days - it will be an interface upgrade mod, and is almost finished.. all the fonts, all the hud, are belong to us.

I know there's been the odd accusation that DRuG is dead.. not the case going by my observations of both MSN, new member requests (many from other gangs), and sheer presence on MTA. But man, like you, I'm just hovering, waiting for GTAT or someone to release a stable multi-mod... -=sigh=- my interest in MTA, like most peoples', comes in waves.. so stik about - we're in for the long haul... all the way to GTA - VR 2010... well.. we can wish.

[DRuG]NikT (25 Feb 2004 02:26 am)
I just made some DRuG player skins based on Tommy for the DRuG Merchandise (link defunct) forum thread. 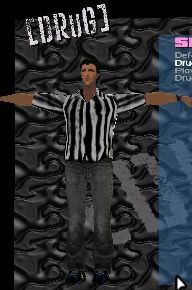 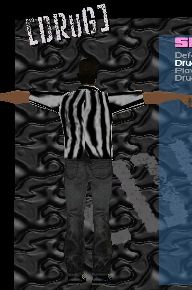 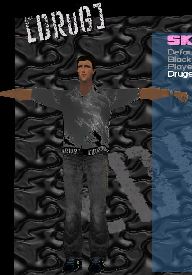 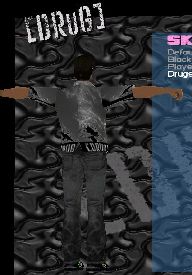 If you would just like to test in 1 player mode by adding to your skins directory, right click on the links below and select "save target as".

We always need new topics on the forums by the way, so if u can think of one, please go right ahead.

I had made a background with the assistance of SpngBb a while back, and included it in dome as a main menu backdrop... but found it worked better in MSN.

It's easy to change your MSN background, so I'm not putting up instructions, but I'll include the file - just right click on the image below-left and select "save target as", then put it somewhere you're gonna remember.

Also just added to the downloads section is Alco64's DRuG-Coaster, SpngBb's wallpaper (below-right) and link-to-us artwork, for those that want to link their site to ours in style. 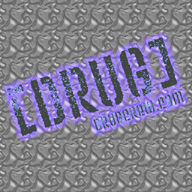 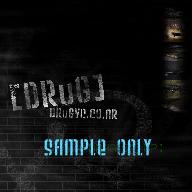 [DRuG]NikT (14 Feb 2004 02:50 am)
Having finally gained a solid understanding of Zmodeler, I can now texture properly and have good control of how the final product appears in game.

Don't expect release to be straight away or anything - this just resolves the only remaining technical hitch that was preventing us continuing work on the project.

Also due for release are a number of cars developed by [DRuG]Fingrz and I - some hirez screenshots of the progress of these and other projected mods can be seen in the old gallery.

See below for dev shots of Alco64's fine work in 3DS MAX: 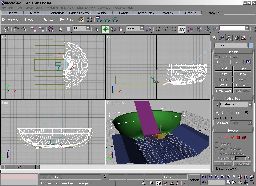 In other news, new progress updates have been added to the release page for GTAT:

So stick with us folks - there's more exciting stuff comin your way soon!

[DRuG]NikT (08 Feb 2004 03:14 am)
After the SQL scripts messed up while trying to use the "rob another member" weapon on the forums game at GangsOfGTA (link defunct), my DollaZ balance dropped in error to rougly -$3,000,000... but today it went the other way - click the picture below. DRuG members on the forums have been sent gifts of many DollaZ, making us the richest people in gangsofgta. 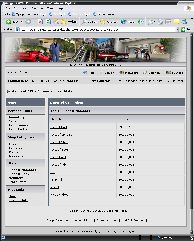 I know it's pointless, but it was funny to me 8P